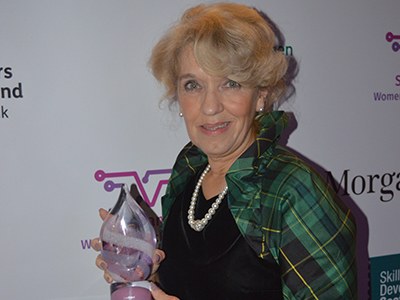 North-East business leader, Jeanette Forbes, has been named CEO of the Year at the inaugural Scotland Women in Technology Awards. The awards, the first of their kind, celebrate the achievements of women who have the drive, commitment and passion to further the technology agenda in Scotland.

Jeanette is Chief Executive of Aberdeen based PCL Group. The company provides data cabling structures for IT and telecoms systems and the supply, maintenance and support of computer equipment to the offshore, marine, commercial, industrial and renewables sectors.

The awards were organised by Scotland Women in Technology (SWiT), a group initiative which aims to attract, inspire empower and retain women by developing a community and network to help grow women’s contribution in the IT industry.

The awards received more than 100 nominations and represented every area of the tech industry, including schools. Jeanette was one of six finalists from across Scotland who was shortlisted in the CEO category which was sponsored by JP Morgan.

The judges thought Jeanette was a worthy winner after hearing of her journey to become CEO of her own company.  Jeanette founded PCL Group in 2000 after being made redundant from the oil and gas sector. The company now operates across Australia, Singapore, Trinidad, Norway, Texas and KL as well as in the UK.

Among those attending the awards ceremony were Deputy First Minister, John Swinney and other government ministers.

“Improving skills, enthusiasm and knowledge of STEM at all levels of school, college and university and encouraging uptake of careers in this sector are vital to both Scotland’s society and our economic prosperity – this is the central aim of our ambitious STEM strategy for education and training that was launched in October,” said Mr Swinney.

“Another key aspect of this is increasing female participation and closing the gender gap that exists within the sector. We are committed to tackling that imbalance and to challenging the gender stereotypes which contribute to it.”

Lynsey Campbell, Scotland Women in Technology board member, said: “This year’s awards have been a huge success and the backing of not just Scottish, but international companies, shows that the sector is eager to engage too.

“We know we have work to do to increase the number of girls studying computing subjects and pursuing these careers, but we hope that these awards, which will be happening annually, inspire girls to get into tech and encourage women to stay and progress to the top of the industry.”

Jeanette has won a number of awards and industry accolades, many of which recognise the work she does to promote STEM-related career opportunities for women, particularly in the oil and gas and wider energy sectors.

Awards and industry accolades have included: